There is nothing like an exhibition brief for developing ideas.  It is the fulcrum for focussing on what one’s real energy and interests currently are.  For this exhibition “Wild Spaces” at the Whitehouse Gallery, Kircudbright, in south-west Scotland, I started with a large drawing of “Ares”, a Knabstrup horse.  These are a particular Danish breed, established 200 years ago, and known for their spectacular speckled coats, as well as their talent for dressage and showjumping.   I liked the original photo because the horse was photographed in a winter woodland which acted as a kind of dramatic camouflage. 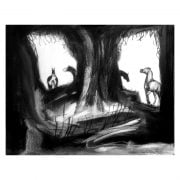 But where to go from this big charcoal work of the horse with the black markings?  I tried abstracting the main shapes of the drawing, but realised that I needed to go deeper (more of which later). I also remembered a lithographic print made around 2012, and returned to this for inspiration for some playful black and white drawings/paintings on canvas.  The first time I had felt so free with paint.  Eureka!  I built on that spontaneous foundation with acrylic paint and charcoal, always working very freely. 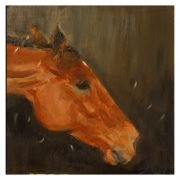 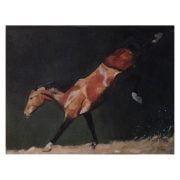 At the same time, by way of this exhibition brief, I was practising my knowledge and skill of using oil paint in a traditional way to explore the form  and colour of the horse, and decided to use a dramatic photograph as source materials.  In contrast to the “flash” drawings above this was laborious and took a period of months to develop.  I did a lot of basic drawing, alongside other oil studies of horses, in particular their heads, to make sure I could translate the anatomy into paint, however loosely.  This was the meticulous side of my practice.

Gradually these two aspects came together as I became more confident about painting horses in a content.  I began to bring together the freedom of the Wild Spaces work with the tight analysis of the studies.  In the process I realised that I was interested and inspired by horses in their own social groups.  I began a series of oil paintings on this theme, imperfect and exploratory, but thrilling for me to be able to introduce colour into my passionate depictions of the horse.

And what about the large Knapstrub drawing of “Ares”?  How to work with that?  The only way for me to truly honour this, with all its contrasts and textures,  was to take it small section at a time, slow and deliberate.  Here is (the beginning of) where my exhibition brief took me! 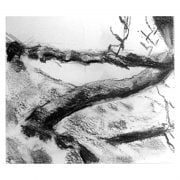 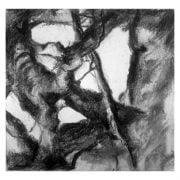 Drawn in colour Degas from the Burrell Collection at the National Gallery,...
Scroll to top